Hostilities caused coach building to be put on hold, and after the war the LMS, by now under the command of Chief Engineer Ivatt, carried on where it had left off.

2300 differs from pre-war examples of its type by having an all-welded roof. Tooled up by the Ministry of Supply, the railway's works developed welding techniques further than it had previously. 2300 features seven third class compartments, and two lavatories, with a side corridor. New to the post-war batches are four doors in the corridor and the usual two on the compartment side.

2300 was sold from service by British Rail to Charringtons Brewery, Plymouth, and used by the barrel-makers (coopers). Aluminium kegs replaced wooden barrels, and 2300 was sold again in 1978 to a member of the LMS&BR Coach Fund. It was moved by rail to Bridgnorth from Plymouth, and underwent restoration from 1978 until 1984.

It has been in SVR service since then, and has undergone further reupholstery and repairs at Bewdley in 1992 with repairs and repaints at Kidderminster in 1997 and 2008.

2300 came into the Trust's care in 2007 when the LMS&BR Coach Fund donated all of its vehicles to the charity. The Trust has provided new batteries and slow-speed chargers as an improvement to the vehicle in 2007.﻿ 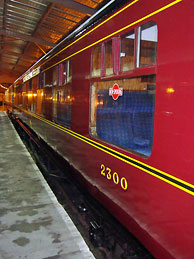 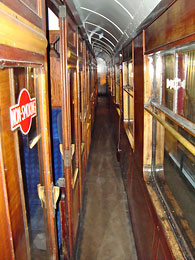