4399 was built by British Railways in 1956 as a Mk1 Tourist Second Open (TSO) with 64 second class seats, all at tables. One of around 1,500 of its type, some were used on excursion trains and had a hard life on football specials. 4399 was one of a batch for the Eastern Region, which were unusual as their chassis were built at Swindon (Western Region) and shipped by rail to Ashford (Southern Region) for the bodywork to be constructed. This was an attempt to increase coach production by allowing wagon builders to fit out coach bodies. The resulting finish was noticeably less pristine than similar vehicles built entirely at York, Derby and Wolverton.

Nevertheless 4399 was selected for preservation in 1983 when it was made redundant by the introduction of Intercity 125 High Speed Trains on the Eastern Region. It was still in service on the day of inspection and the volunteers who were sent to view it had to wait for the train to come back onto the depot, despite it being theoretically already withdrawn for sale or scrap. 4399 came to the SVR from Neville Hill depot in Leeds on March 14th that year and was put straight into service still wearing blue and grey BR livery. A year later it was repainted into the BR maroon livery of the 1960s by volunteers at Bridgnorth.

Sponsored by two volunteers, 4399 needed some repair work a few years later and a start was made, but owing to other priorities this was halted and the coach put into store at Eardington. Unfortunately vandalism and thefts occurred making this repair more challenging. The SVR Charitable Trust bought the coach from the original sponsors in 2015, and in 2016 the Bridgnorth Carriage restoration volunteers resumed work on what has turned out to be the heaviest rebuild of a Mk1 coach in the history of the Railway!

As part of the rebuild 4399 has been altered to become a wheelchair access coach and shared part of a £75,000 award from the Department for Transport (DfT) to improve disabled access at the SVR.

4399 has had much of the floor replaced, and all of the lower bodywork, some of the roof and both ends replaced with new steel. All of the seats are reupholstered with 1956 period chain-link pattern red moquette, and much of the interior wall panels are new lacewood veneers. Lacewood is the name given to timber from the London plane tree, which was used in traditional English furniture making. 4

399 and most TSOs have lacewood in the passenger seating areas and darker sapele from Africa in the entry vestibules where soot from open windows is likely.  Alterations to make 4399 wheelchair friendly include removal of 12 seats to allow a pair of double doors to be fitted on each side, next to the wheelchair parking area. Also the two small lavatories have been taken down and their wall components reassembled to form one large ‘roll-in’ lavatory with disabled lavatory fittings. By reusing the original sections this new lavatory looks like something British Railways could have built in 1956. They made all of the parts and just laid them out in the wrong order perhaps?!

4399 took 3½ years to reconstruct at Bridgnorth, followed by final mechanical work to brakegear, steam heating and bogies then finish painting to 1950s carmine and cream at Kidderminster in 2019. 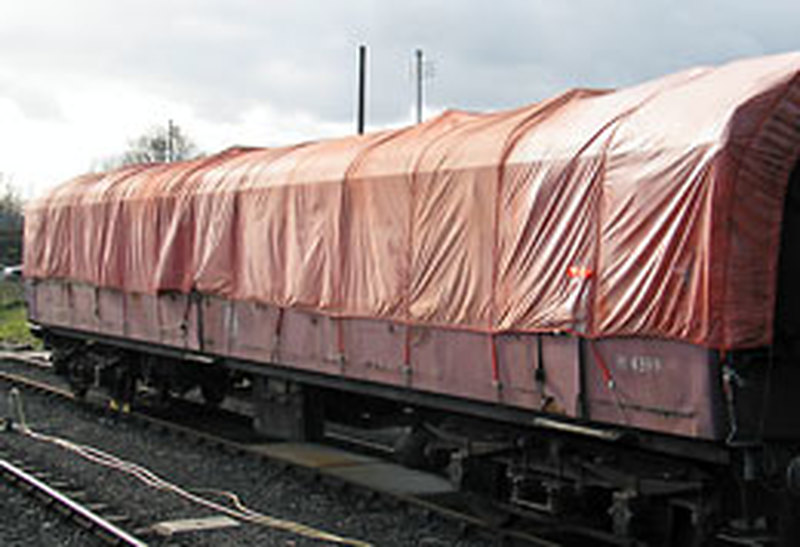