An 'Ugly Duckling' emerges as a beautiful swan

An 80-year-old LNER carriage which has been completely restored to its historic best was unveiled in a unique ceremony at the Severn Valley Railway (SVR), featuring a live performance by renowned harpist David Watkins on the station platform.


The restoration of the SVR’s LNER teak train carriage No. 43600 aimed to recreate many of the original features of the vehicles and included fitting new seating, authentic LNER pattern moquette, new lighting, tables, luggage racks, coat hooks and mirrors, along with fresh wall coverings reflecting the LNER’s use of rexine, an early form of vinyl.﻿ 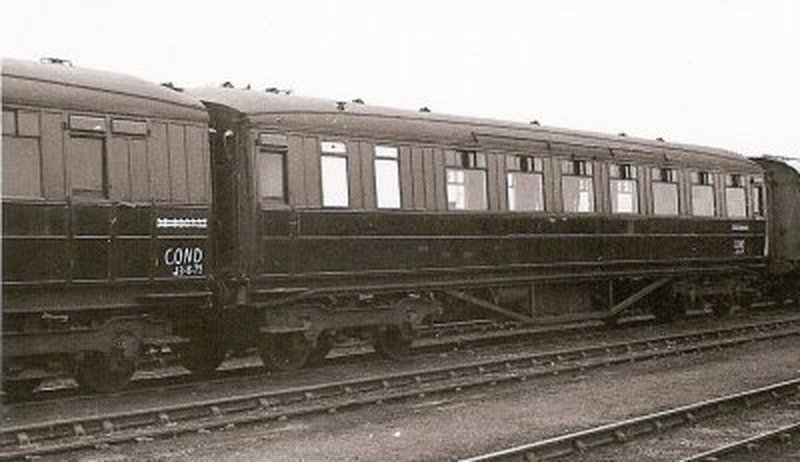 The completed restoration project was funded by the SVR Charitable Trust (SVRCT) and was first started by the LNER Coach Fund over 30 years ago. The work also coincided with the SVR’s major overhaul and re-varnish of the carriage as part of its maintenance cycle.

To officially welcome carriage No.43600 back onto the Railway, harpist David Watkins serenaded the crowd at Bridgnorth station on Sunday, 23rd November during the engine’s service layover.

Mr Watkins has a close family association with railways as his father, Donald, was a senior designer at the Armstrong Whitworth Scotswood works in the 1930s where he designed the first diesel electric railcar, the ‘Tyneside Venturer’.

Prior to this event, SVR workers from Kidderminster and Bewdley who were involved in the restoration rode in its first public train when the carriage re-entered service on Saturday, 15th November.

Shelagh Paterson, fundraising manager for the SVRCT, said: “This fantastic restoration of Carriage No. 43600 is just another example of how the Charitable Trust is continually working to raise funds to improve and enhance all aspects of the Railway. 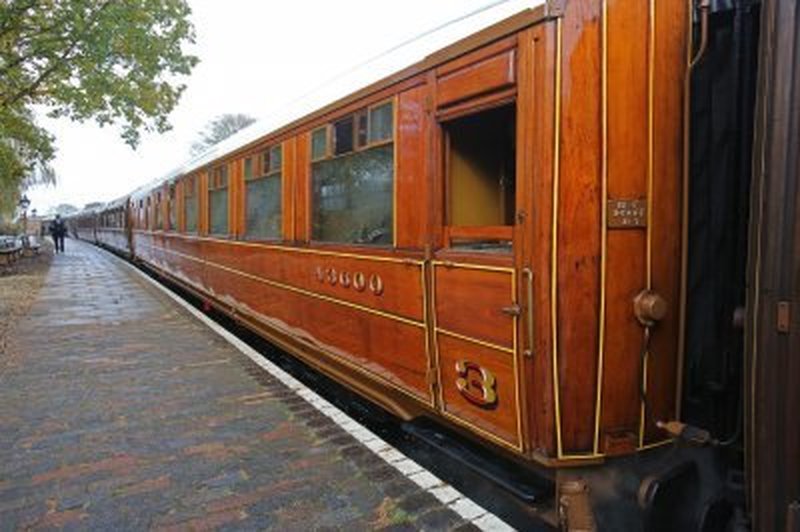 “Carriage No. 43600 now looks a real picture, both inside and out, and is a credit to all those responsible for its original purchase and later restoration works over the last 34 years. All the new parts in the upgraded 43600 have been funded by individual sponsors whose input will be acknowledged in a special panel in the carriage.”

The ceremony at Bridgnorth was also attended by Tim Godfrey, the grandson of Sir Nigel Gresley, the LNER Chief Mechanical Engineer, and Tim’s wife, Ann. In its renewed form, Diagram 186 Tourist Third Open (TTO) No. 43600 is a significant enhancement on the SVR’s popular ‘Teak Train’, comprising vehicles designed by Sir Nigel for the former Great Northern Railway and the London & North Eastern Railway (LNER), giving a more authentic ‘Gresley touch’ to the interior.﻿

One notable technical innovation is that carriage No. 43600 will be the SVR’s first full use of LED lighting in a carriage, substantially reducing the power demand and, therefore, saving considerable sums on the battery requirements. ‘Sister’ open carriage, 52255, is set to undergo similar interior improvements in 2015.

The engine has been an innovator before; when built in York in 1934, TTO 43600 was one of a batch of carriages with the first welded underframes reducing the vehicle weight by about one ton, compared with riveted construction. No. 43600 is probably the sole survivor of the batch.

The full restoration of carriage No. 43600, is the first to be completed by the SVRCT since its 2012 change of name and widened purpose.﻿ 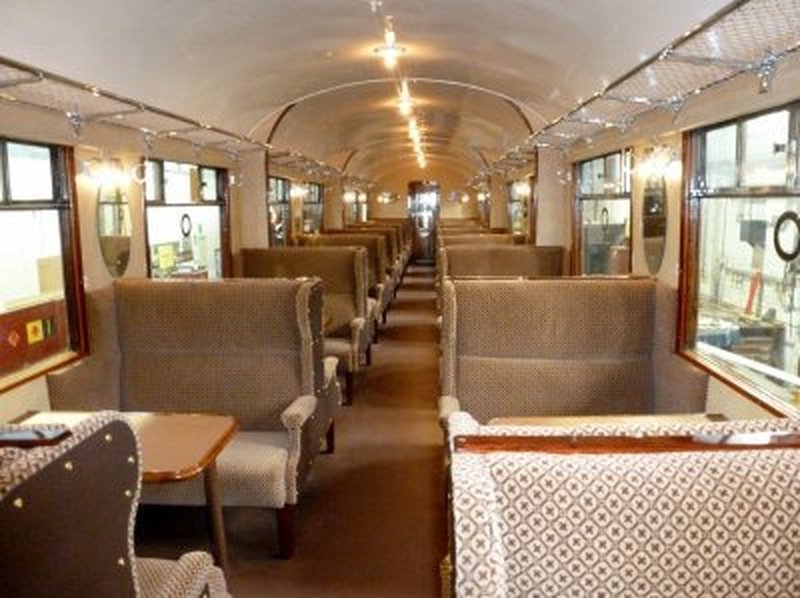 The project to upgrade the interior of this hard-working Tourist Third Open carriage has been completed, and a public announcement will be made shortly. But our friends and supporters merit an early view of what has been achieved since fund-raising started in 2009 – including a ‘first’ with LED lights. Thank you for your loyal support. We hope you like the result. The carriage is planned to be in service in the Teak Train for the 10.30am/2.05pm Kidderminster departures and the 12.15pm/4.35pm Bridgnorth departures on 15th/16th and 22nd/23rd November – and, oh dear, just in time to face the knocks and hazards of buffet trolleys on the Santa trains...
GNR 2701 has now taken 43600’s place in the Kidderminster Carriage Works for its own overhaul.﻿

This substantive restoration project is due for completion at the end of this year, a first for the Charitable Trust. 43600 has been on the SVR and giving sterling service since 1980 – some 34 years, more than twice its combined LNER and BR service (each 14 years). We conservatively estimate that, in today’s money, it has earned the Railway around £1.5m in ticket and buffet revenues. For most of its life, insufficient finance has meant its seating has been a compromise – originally loose plastic chairs and then some surplus seating with inappropriate moquette from the BR era. It has in consequence had a rather drab and uninteresting interior. However it will soon emerge complete with new seating, authentic LNER pattern moquette, new lighting (the SVR’s first full use of LED lighting in a carriage), new tables, luggage racks, coat hooks, mirrors – all reflecting a more appropriate Gresley style of finish. The cost of all these items has been sponsored by individual supporters. It will be a significant enhancement of the Railway’s Teak Train – with ‘sister’ open carriage 52255 to follow with similar improvements next year.﻿

On the right is 43600, already in the Kidderminster Paintshop and ‘stripped for action’ for the serious work to proceed, including its internal improvements.

The new LNER tables for 43600 and 52255 are now being made. An order is also being placed for the LNER-style wall lamps to go in these vehicles – this is with a firm in Stourport reflecting our usual aim of supporting local businesses.﻿ 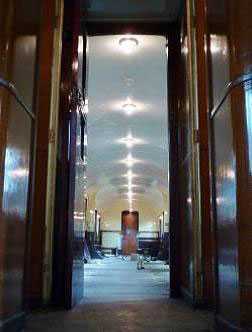 Work is progressing with the new floor for 70759’s passenger compartments. In 43600 the heater pipe protectors are being refurbished and refitted, and the first sections of the fawn moquette are in place. New LNER tables also are being ordered.

At Kidderminster there is progress with 70759’s bogies overhaul. We have had to order 16 new bearing pads at £65 each, totalling just over £1000. Can we tempt anyone out there to sponsor some or all of these please? They are items suitable for gift aid to the Trust. (Please contact the editor on gresley@gotadsl.co.uk if you can help here).﻿ 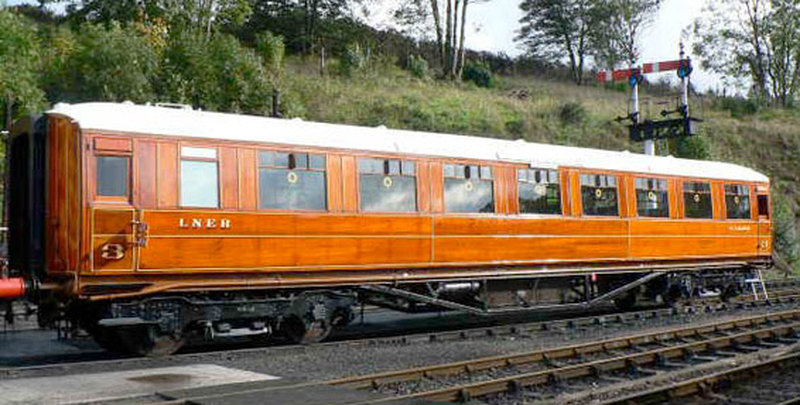 We have taken delivery of some new parts, and others are being made by our welder. Fitting in 43600 is planned to start early in the New Year. A ‘forest’ of seat legs is being prepared for a life supporting the new seating in the TTOs. They are in the process of being stained and varnished and some now fixed to the new seat base frames.﻿

Like many other main line railways, the LNER was predominantly equipped with a large and varied fleet of compartment carriages until the 1930s. Changes in social habits and improved construction techniques around that time led to the appearance of the ‘open’ coach. Side doors were provided only at the vehicle ends, reducing draughts, and every passenger was seated at a table – appealing to travellers and convenient for restaurant and buffet car sales staff. 43600 is one of four Gresley Open Thirds on the SVR. It was built at York in 1934 to Diagram 186 and is significant as being one of the first LNER vehicles with a welded chassis, which made it one ton lighter than a fabricated chassis. Along with the similar Trust owned 52255, after withdrawal from public service in 1961 43600 also served in the 1960s as part of a BR Eastern Region Control Office train, which was intended for use in the event of nuclear war.

A detailed article on the ER Emergency Control Trains, from June 1981 Railway World, is featured on the LNER Coach Association website.

43600 was purchased by the LNER (SVR) Coach Fund, and with then privately owned 52255, came to the SVR in 1980. The Coach Fund was involved in the mid-1980s in the external restoration of both these carriages to 1935 livery. Together with Buffet Car No 643 (separately owned by the SVR Holdings Company), these three vehicles provided the Gresley presence on the SVR for many years. Their high seating capacity means they work hard for their living in daily SVR public service. The interiors of these Third Opens remain very much a compromise with their BR Mark 1 seating. The Trust Company’s LNER Carriage Group has detailed plans for giving 43600 the ‘Gresley touch’, these plans having been inherited from the LNER (SVR) Coach Fund, which had already started fund raising prior to 43600’s transfer to the Trust.﻿ 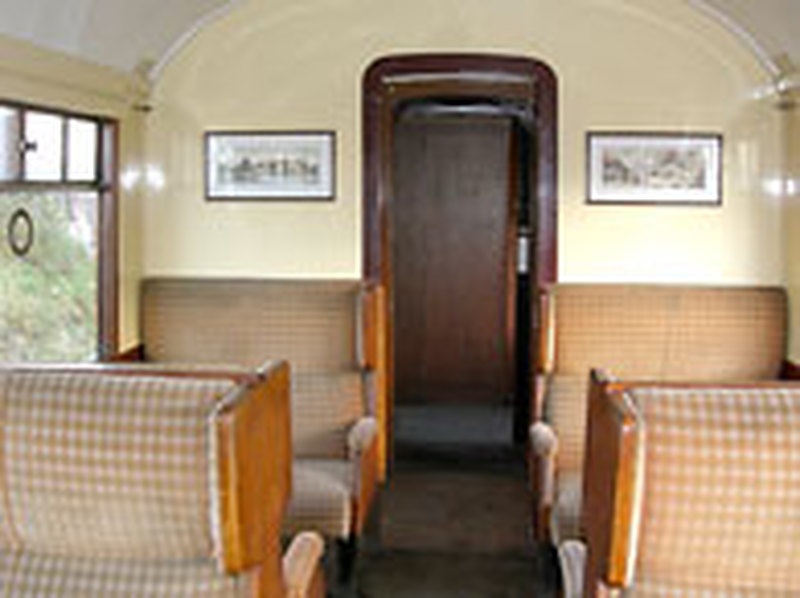