Preserving our heritage for future generations

Last week, contractors Walsh completed the pour of concrete (see our accompanying video) on top of Falling Sands Viaduct’s seven arches, then added a waterproof layer of Leoseal on top of this. Work has gone extremely well so far, and the job is currently running a little ahead of schedule. The project’s civil engineer Jonathan Symonds told us more about what’s taken place during the past few weeks:

“After the track and fill material were removed, our contractors had exposed the curved tops of the arches, and found them all to be in good condition. Walsh had to work around the medium pressure gas main, which they propped up on chocks and strapped up. They dug around the pipe by hand, and removed another redundant pipe. ﻿

“Once all the sandy fill material was removed from the viaduct, you could see the original 19th century pitch had cracked in places and was clearly contributing to the water ingress. The original iron drainage pipes were also revealed. These were in good condition, and have been repaired by putting glass reinforced plastic liners inside the pipes and sealing with a polymer sealant.

Walsh will move on to replace the fill material before the track is re-laid and the signalling re-instated. It’s planned that the line between Kidderminster and Bewdley will be re-opened for April 4th.​

During January BBC Midlands Today filmed work giving us some excellent publicity. Click on the other image to watch this. 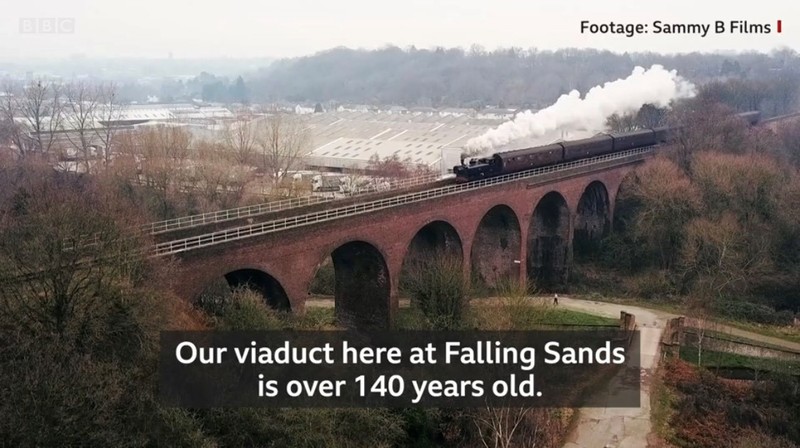 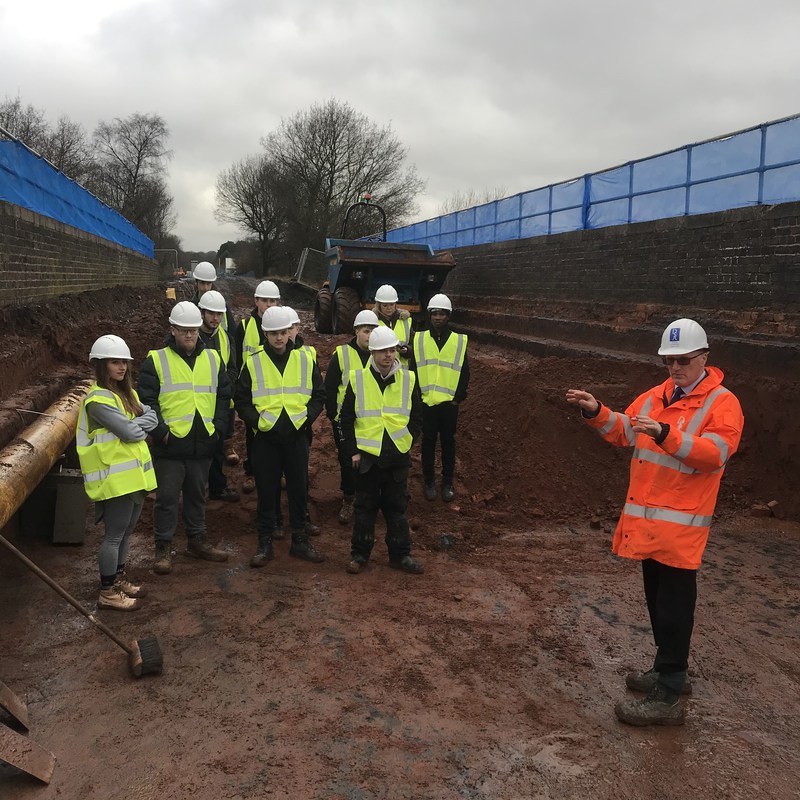 Students from Kidderminster College Brickwork course braved a rainy day to visit the Falling Sands Viaduct site. Jonathan Symonds, the civil engineer for the project and infrastructure volunteer Nick Yarwood talked them through the urgent need for the project and the works that have taken place so far. They also discussed the navvies who built the bridge and the kind of life that bricklayers would have had in the 1870s, compared to today. Laura Hines, activity and interpretation manager ended the visit with an overview of upcoming events and exhibitions SVR have planned to share some of this history.

The group will return in the early summer to see the second phase of the project, when brick workers will be using rope access on the outside of the structure to repoint the spandrels and piers.

Be a star at the SVR

We're looking for volunteer voice actors - both male and female, of all ages - to record up to two minutes of dialogue in a professional recording studio. We'll use the recordings to bring characters to life in our forthcoming exhibitions linked to the Falling Sands Viaduct restoration project.

For example, we need a girl with a Black Country accent to play evacuee Joan, and a man with a soft Edinburgh accent to play Edward Wilson, the man who designed the viaduct. For a full list of characters and details of how you can create and send an audition recording, please go to our dedicated website fallingsandsviaduct.org.uk You'll need to hurry though! We need your audition recording by 27th January at the latest.

As work starts on our £1.3 million restoration of Falling Sands Viaduct, we’re looking forward to another fantastic year of helping to preserve the SVR. Thanks to our donors’ generosity in 2019, we’ve been able to help make a difference at the SVR in all these ways: 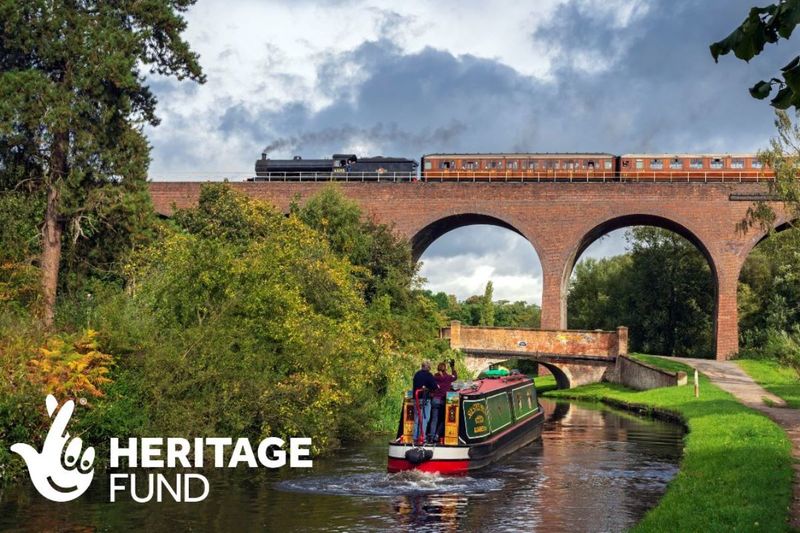 Falling Sands Viaduct - essential restoration work has started on the structure, and the associated activities programme is well underway

Hagley Hall – the overhaul of the SVR’s flagship loco continues apace, for a planned return to steam later this year

Anderson shelter and outdoor classroom - for school groups at The Engine House, Highley

Diesel depot – a range of equipment and improvements, including external LED lighting, an auto hook for moving the huge jacks within the building and a pipe threading machine

GWR 9615 - The long-awaited, back-to-the-floor restoration of a kitchen diner first

Commemorative garden – for reflection and remembering loved ones at The Engine House, Highley.

Work is now underway in earnest on the restoration of Falling Sands Viaduct. The last few days of our Festive Season services ran between Bewdley and Bridgnorth only, as the line was closed between Kidderminster and Bewdley to allow the works to commence on the viaduct.

On the last two days of 2019, the paid permanent way team was supplemented by more than a dozen volunteers to carry out the task of lifting the track from above the viaduct. Volunteer p/way administrator Keith Brown was one of working party, and he said:

“After a few initial problems, we got off to a great start with the job, and by the end of the first day we’d lifted more than half the track. We completed the task the following day. The sun was out – and that’s not something we often see when we’re starting on winter permanent way work! It was a thoroughly productive couple of days, and very satisfying to be kicking off this important restoration project. Thanks to everyone who turned out to help.” ​

The appointed contractors for the project, Walsh Construction, have now started to remove ballast from the structure of the viaduct.

This major project is being funded by a £925,000 grant from The National Lottery Heritage Fund, along with almost £400,000 of donations from individuals, community organisation, companies and other grant-making bodies. You can find more information and updates on the project at www.fallingsandsviaduct.org.uk

The Charitable Trust’s recently restored LMS 2866 brake van has won a place on the shortlist for a prestigious award. It’s under consideration for the Heritage Railway Association’s Morgan award, which has come as welcome news to all those who’ve worked tirelessly for many years to complete the overhaul of this unusual vehicle. It’s also known as the ‘Stove R’ and is one of only two still in existence. Around 20,000 volunteer hours have gone into its restoration, which has been largely supported by grass roots fundraising and a small grant. The painting elements were led by SVR apprentice Ronan O’Brien, who has developed his skills considerably on this project, using traditional coach painting, lining and signwriting techniques.﻿ 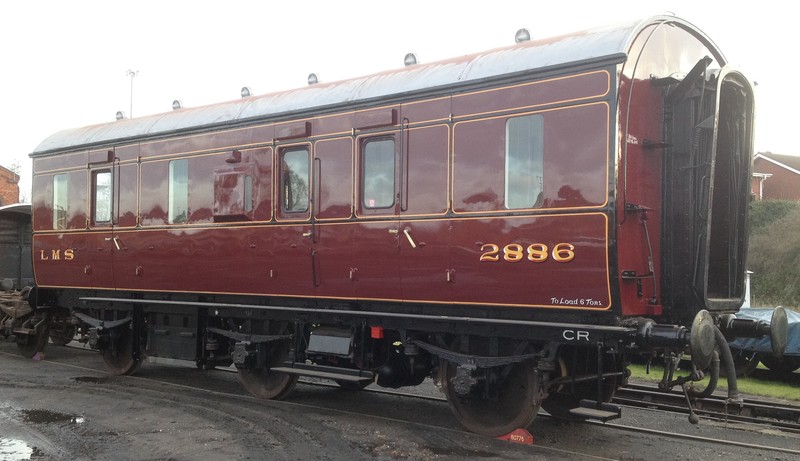 Look out for the Stove R later this year, when it makes its debut on the Railway as a mobile exhibition vehicle, funded as part of our Falling Sands Viaduct-related activities.