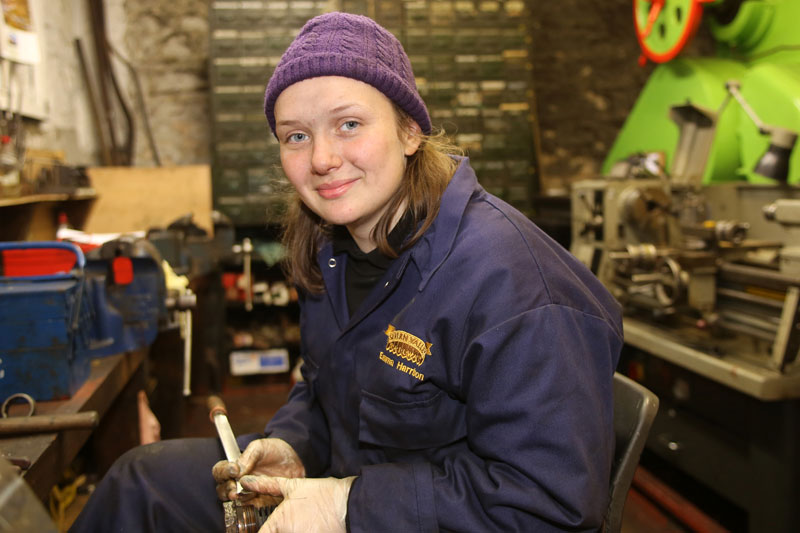 A young woman is following in her family’s footsteps and making history at the Severn Valley Railway (SVR) by becoming its first female apprentice.

Emma Harrison, aged 17, is one of five new recruits to enrol in the Heritage Skills Training Academy (HSTA), fulfilling a lifetime ambition of working on a heritage railway.

As a child, Emma’s love of all things heritage and steam was instilled in her by her father and late grandfather, who sadly passed away in July this year, but not before Emma was able to tell him that she had made it into the Academy, of which he was incredibly proud.

Family holidays regularly included trips to various heritage railways, such as the Talyllyn Railway, where, as testament to her passion, Emma has been a volunteer since 2011, joining the locomotive crew on their early morning starts to clean the engines and see them out of the shed for their day’s running.

Emma, from Wolverhampton, said: “It was normal that a family holiday would include at least one trip on a railway and it’s still true today that we always manage to find a railway to go on, even when abroad.

“A great saying in our family is ‘a holiday is never a holiday without a railway in it’, which developed my love for railways and steam engines, and got me involved in heritage engineering.”

By being accepted into the SVR’s HSTA, Emma is fulfilling a family legacy, as her late grandfather was a member of the Gloucester and Worcester Railway, as well as a financial supporter of the SVR, along with Emma’s grandmother.

It was through her grandmother that Emma found out about the HSTA after she received a leaflet and passed it on to Emma, who then did her own research.

She said: “I decided to apply and see where it took me. I was extremely happy and overjoyed to get the place and as soon as I got off the phone I was straight back on the phone to my mum, dad, gran and my granddad, who was so proud of me.”

Also joining Emma on the HSTA this year are Alan Brookes, aged 19, from Stourbridge, Tom Hubble, 20, from Birmingham, and Dean Parkin, 17, and Ryan Parsons, 20, who have moved all the way from Launceston in Cornwall and Wimborne in Dorset, respectively, to take up their places in the academy. All five new trainees beat off stiff competition to be chosen from dozens of enthusiastic applicants from all over the country and abroad.

But the fact that she’s the only female in the Academy isn’t lost on Emma.

“If I’m honest, I wasn’t sure I would get the apprenticeship but I hoped they would realise that they needed a female in the mix!” she said. “It’s a daunting thought that I’m the first female apprentice with the SVR, but it’s a learning curve for both me and the railway.”

The pilot HSTA scheme has been successfully working with three apprentices since September 2013 in the build up to its official launch in September of this year and the new recruits are set to follow in their footsteps, learning the skills associated with keeping a steam railway up and running.

The Academy is one of a range of key projects financed by the fundraising efforts of the SVR Charitable Trust (SVRCT) and the SVR’s Share Offer scheme.

The Charitable Trust was launched in 2012 to raise vital funds to assist in the preservation and operation of the Railway. Through initiatives such as the HSTA, the SVR hopes to become the UK’s Heritage Engineering centre of excellence. Whilst the Charitable Trust is incredibly encouraged by the level of financial support given to the Academy to date, they still need to raise considerable sums to ensure its continued existence.

Richard Thurlow, HSTA co-ordinator, said: “Serving the dual aim of securing the future of the Railway and offering training and employment to young people has seen the Academy become widely accepted and acclaimed throughout the Railway by staff, volunteers and visitors alike.”

An Ugly Duckling emerges as a beautiful swan

An 80-year-old LNER carriage which has been completely restored to its historic best was unveiled in a unique ceremony at the Severn Valley Railway (SVR), featuring a live performance by renowned harpist David Watkins on the station platform.

The restoration of the SVR’s LNER teak train carriage No. 43600 aimed to recreate many of the original features of the vehicles and included fitting new seating, authentic LNER pattern moquette, new lighting, tables, luggage racks, coat hooks and mirrors, along with fresh wall coverings reflecting the LNER’s use of rexine, an early form of vinyl.

The completed restoration project was funded by the SVR Charitable Trust (SVRCT) and was first started by the LNER Coach Fund over 30 years ago. The work also coincided with the SVR’s major overhaul and revarnish of the carriage as part of its maintenance cycle. 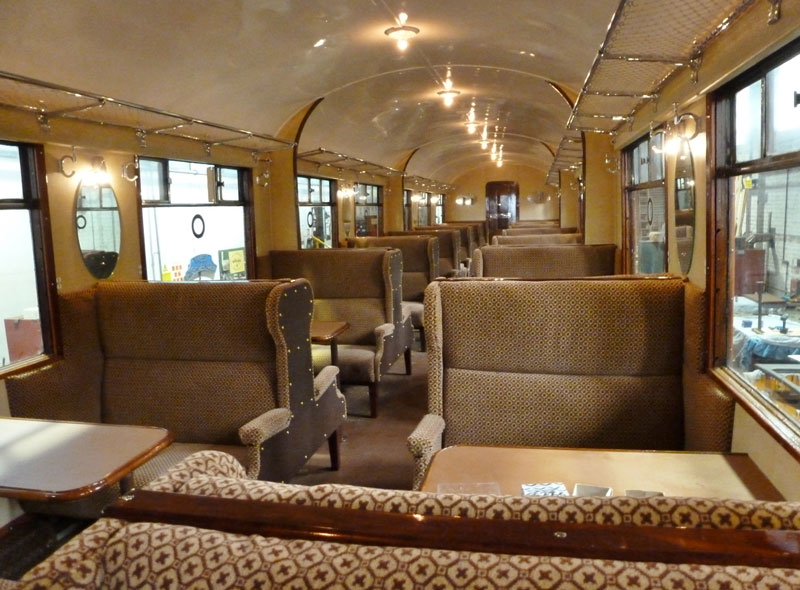 It was an exciting day for apprentices from the Severn Valley Railway’s (SVR) Heritage Skills Training Academy as they took delivery of £8,000 worth of tools from B&Q.

Staff from B&Q’s Kidderminster store were on hand at Kidderminster station to hand over the eagerly-awaited bounty, which was loaded on to one of the SVR’s heritage steam trains under the watchful eye of selected SVR guests.

They then joined the excited apprentices for the 16-mile journey to Bridgnorth Station in Shropshire, which takes in a further six stops along the 150-year-old route.

Essential kit will be used at SVR’s Locomotive Works at Bridgnorth and the Carriage and Wagon department at Kidderminster, while each apprentice was also presented with their very own tool set to keep.

John Leftwich, Chair of the SVR’s Charitable Trust Development Board, who helped secure the donation – the largest in the Railway’s history – said it was a very welcome boost to its on-going projects.

“Preserving such a historic and well-used attraction for the 200,000 visitors who travel each year with us is a constant challenge and a costly task, but one made easier by generous donations such as this one - we are all very grateful,” he said.

Sam James, deputy manager of B&Q’s Kidderminster store, said: “The Severn Valley Railway is a jewel in Shropshire and Worcestershire’s crown and we are thrilled to be able to lend our support to ensure that this remarkable infrastructure is preserved for the future. It’s wonderful to see the next generation of railway engineers gathered here today and we wish all the apprentices lots of luck as they embark on their exciting new careers along this beautiful stretch of English countryside.”

The Heritage Skills Training Academy (HSTA) has been launched to teach young people the traditional skills of maintenance and restoration of locomotives, carriages and heritage buildings. The Academy has just welcomed five new apprentices, all of whom will benefit from the new tools.

This donation of crockery will go towards the 7960 carriage. The 7960 carriage is a Kitchen Car with restaurant accommodation for both First and Third class passengers. LNER Kitchen cars were among the most advanced in the British Empire, and featured combined electric and anthracite cooking equipment, and luxurious passenger saloons. 7960 is expected to be complete and ready to go back to work in the Spring on 2015.

Chinasearch is Europe's largest distributor of discontinued china, glassware and cutlery, supplying them to individuals, companies, trade outlets, theatre/film companies and embassies all over the world. They have thousands of patterns in stock, including world renowned brands such as Wedgewood, Villeroy & Boch, Royal Doulton and Spade. They are proud of their exemplar service and the attention they give to each customer. They have built their business and reputation on a personal service intent on finding exactly what you're looking for as quickly as they can and delivering it carefully selected, hand-packed and dispatched.

The second part of the order from Chinasearch was twelve sauce boats and salt and pepper sets. This made the value of the donation around £2000.00. The Trust is extremely grateful to David Ward and his company Chinasearch for this gift. The volunteers in the Carriage and Wagon Department were delighted with the crockery and have immediately started designing pockets for the drawers using samples from the 80 sets of crockery give. 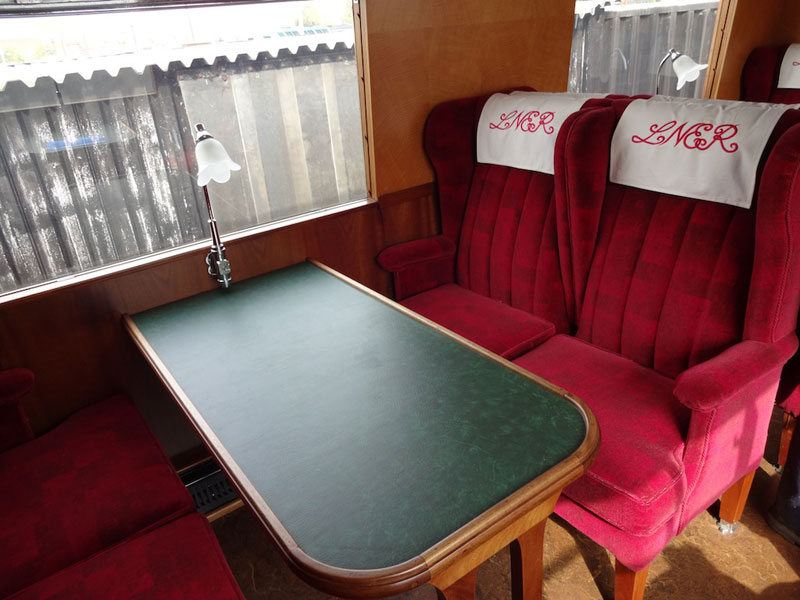 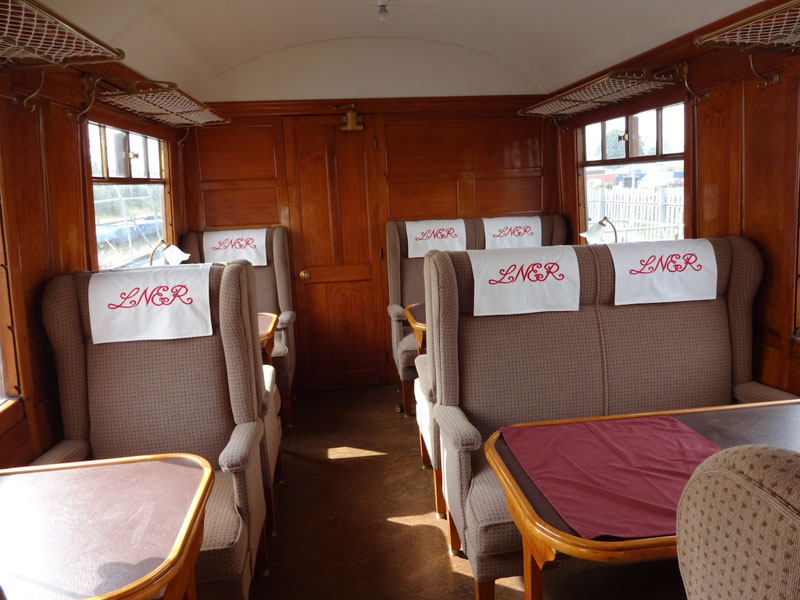 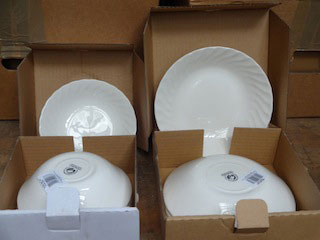 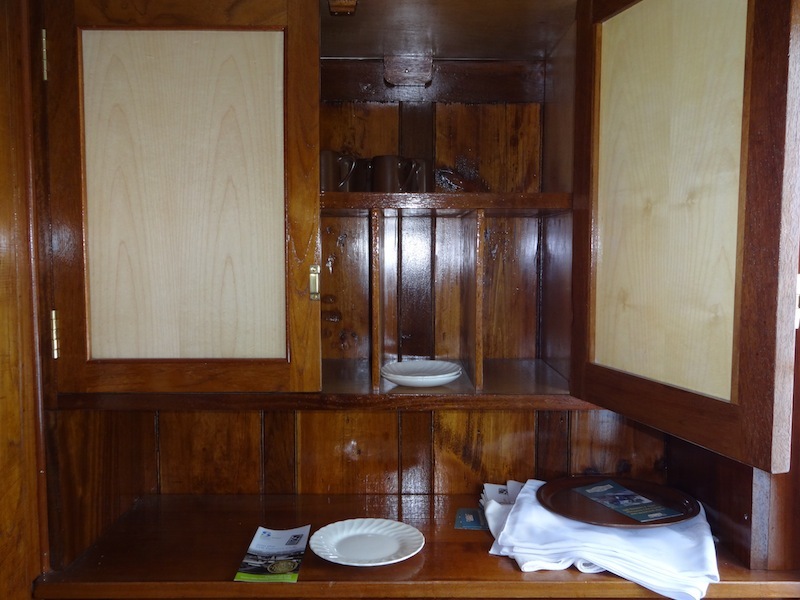 Champagne corks were popping at Ludlow Race Course on 10th April as the Severn Valley Railway Charitable Trust romped home with £62,000 from this exceptional charity fundraiser. The money raised will be doubled by the Heritage Lottery Fund to a marvellous £124,000. As if that wasn’t success enough, a guest from a West Midlands Trust donated a further £106,000 on the day to fund the training of two apprentices for five years at the newly formed Heritage Skills Training Academy on the Railway. In attendance at the lunch amongst the guests were no less than one Lord Lieutenant, one High Sheriff, four Lords and almost 600 guests.
April 2014 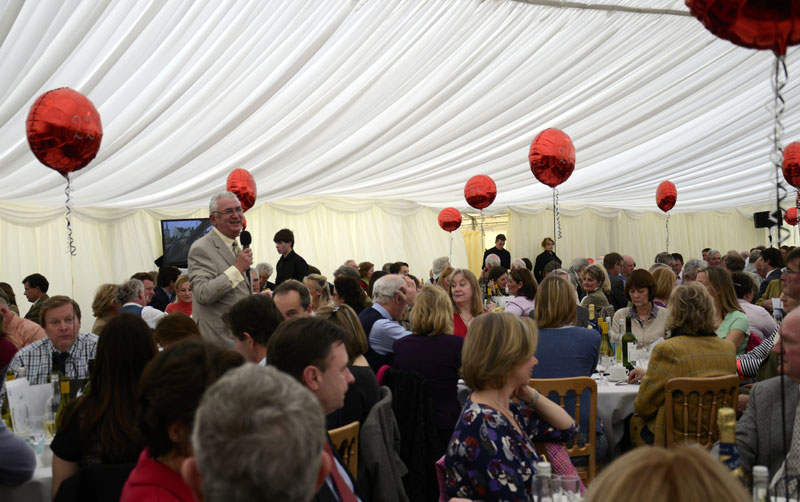 The Severn Valley Railway Charitable Trust (SVR Charitable Trust) has won £95,000 to support one of Britain’s leading heritage railways. The Heritage Lottery Fund grant will help fund the restoration of the classic Great Western Railway (GWR) locomotive 4930 ‘Hagley Hall’ which will be used as the learning and resource tool for the students and apprentices of the Severn Valley Railway’s Heritage Skills Training Academy based in Shropshire and Worcestershire.

Maintaining its reputation as a pioneer, in September 2013 the SVR developed and launched a pilot Heritage Academy; an apprenticeship and training scheme for young people. It is recognised that the SVR’s workshops are already well developed and seen as a centre of excellence by the Heritage Railway Association and other heritage railways, and the workshops will provide an excellent environment in which to learn under the tutelage of experts.

The size of the restoration project, which will involve stripping the locomotive down to the last nut and bolt, will enable apprentices to experience and acquire a full range of heritage engineering skills.

Hugh McQuade, Chairman of the Severn Valley Railway Charitable Trust, said: "Whilst the Severn Valley Railway’s workforce consists of highly qualified and skilled staff and volunteers, it is ageing. Individuals with the requisite heritage skills, for example steam locomotive fitters or boilersmiths do not exist in the modern workplace and for the Railway to survive these time served skills need to be passed on to a younger generation. The HLF funding will therefore have far reaching benefits for the Railway now and into the future.”﻿ 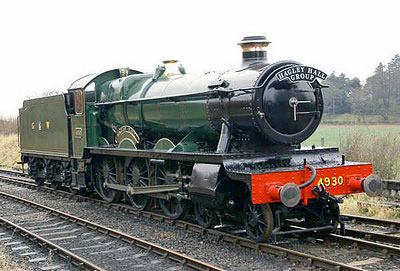 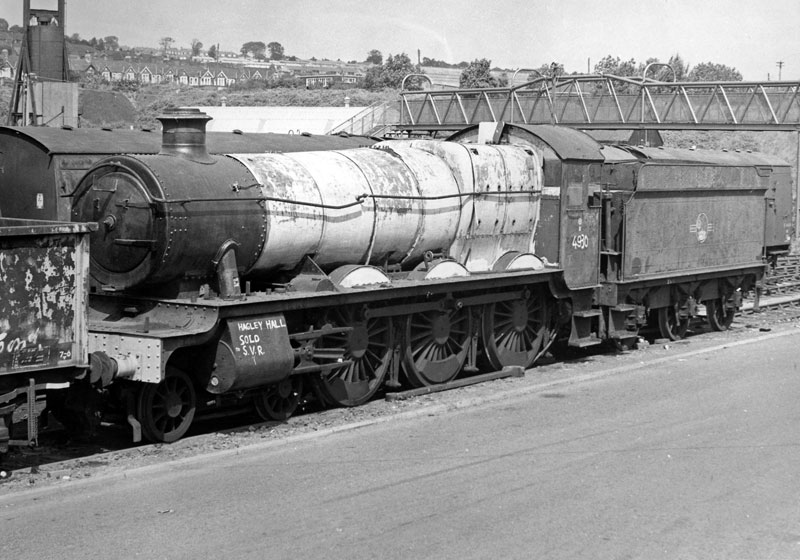 Next Annual General Meeting of the SVR Railway Charitable Trust

Please find below the documents relevant to the next AGM of the Board of Trustee's being held on the 17th February 2014. We hope to see as many of you there as possible:

Please take the time to read the annual Chairmans Statement which details progress of the Charity up until December 2013.