A Major Milestone in more ways than one

Major celebrations took place on Sunday 6th October as key supporters of the Severn Valley Railway and the Charitable Trust saw the 4930 Hagley Hall finally begin it's road to restoration. Around fifty guests attended the loco’s ceremonious departure from The Engine House Visitor Centre to undergo preliminary assessments at Bridgnorth before the overhaul commences. The locomotive’s restoration is one of the key projects for the Charitable Trust, and is being supported not only by the SVR Share Offer, but also the Friends of Loco Hagley Hall Group.

Guests who attended had a double cause for celebration as the SVR announced that their 2012 Share Offer has now passed the £2m milestone. On the closing day of the scheme (30th September 2013) the total figure raised through the Share Offer was a remarkable £2,001,391.

With the support of the Charitable Trust, the Severn Valley Railway Heritage Skills Academy is
now underway. The SVR recently appointed Richard Thurlow to the role of Heritage Skills Training Academy Officer marking the beginning of this ground breaking project. The scheme is designed to imbue young apprentices in the traditional methods of working and to train them in the essential skills of locomotive fitting, boiler making, carriage joinery, maintenance and restoration as well as the restoration of heritage buildings. Richard will be the point of contact between Telford College, where the trainees will be undertaking their engineering qualifications, and the Railway.

Three trainees have also now been selected for the Heritage Skills Academy's first ever intake. They are:

Nick Ralls, SVR General Manager commented in his announcement of these appointments; "the setting up and commencement of the Heritage Training Academy is a significant step for the SVR and demonstrates the importance of the Charity to the future development of the Railway".

The Severn Valley Railway Charitable Trust Ltd has introduced a major fundraising programme to recognise people pledging to support the Railway beyond their lifetime.

Many people are passionate about the Railway and would love to help keep it alive but perhaps feel they do not have the means to do so at the moment. The SVR Guardians club encourages supporters to make a gift in their Will to The Trust which can be used to fund the Railway far into the future but, most importantly, doesn't actually cost anything now.

Commenting on the scheme, Stewart Clark member of the Board of Trustee's says “I have spent many happy days and much of my spare time supporting and enjoying everything this splendid railway has to offer. Knowing that my support will continue to benefit the Railway when I am no longer here is immensely reassuring".

Supporters who tell the Charity they have left a legacy will receive a special “Founder Member’s” lapel pin badge to demonstrate their commitment to the SVR, they will receive updates on the activities of the Trust and they will join a generous group of people who are already securing the Railway's future by acting now.

The Corporate Partnership Club has been created to raise additional funds for the development of the Railway and provide key business benefits to Corporate donors including “money can’t buy” experiences.

The Club has three tiers of membership, and lasts for three years:

A range of benefits from exclusive behind-the-scene tours, family passes and use of our luxury dining carriage for corporate entertainment are included in the membership.

Commenting on the new programme, Tim Hill, Joint Managing Director of Hills Ford said "Being able to give our suppliers, staff and clients something special, unique and incredibly memorable will assist in setting us apart from our competitors”

Click here to download the Corporate Partnership Brochure and here to learn more about the benefits and experiences you receive.

Capturing the Magic of the Severn Valley Railway

The Railway’s Trustees selected the winning images from over 80 entries that were submitted by enthusiasts and visitors to the Railway. Each of the talented winners will receive a family ticket worth £49.50 for a day on the Railway.

Photographs were submitted for each of 3 categories to represent all that is best about the SVR: People (Visitors and Volunteers), Rolling Stock (Locomotives, carriages & Trucks) and Infrastructure. Commenting on the submissions, Hugh McQuade, Chairman of the SVR Charitable Trust said “We were delighted both with the number of entries and the quality of the images that were entered. They really capture the essence and atmosphere of life on the SVR”.

The winners were as follows:

The winning entries can be viewed at Photo Competition Winners and on the home page of the Trust site www.svrtrust.org.uk

The Charitable Trust secures up to £500,000 Lottery funding for Volunteers 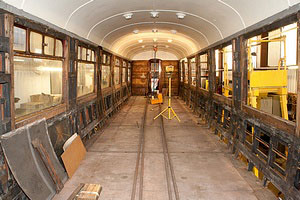 One of Britain’s leading heritage railways has secured substantial lottery funding to help it unlock private money to protect its long term future.

Every £1 the SVR Charitable Trust raises for the Endowment, HLF will match, up to a ceiling of £500,000 - money which will be put towards the substantial annual restoration costs of the Railway’s extensive and historic collection of locomotives and carriages, built during the heyday of steam travel.